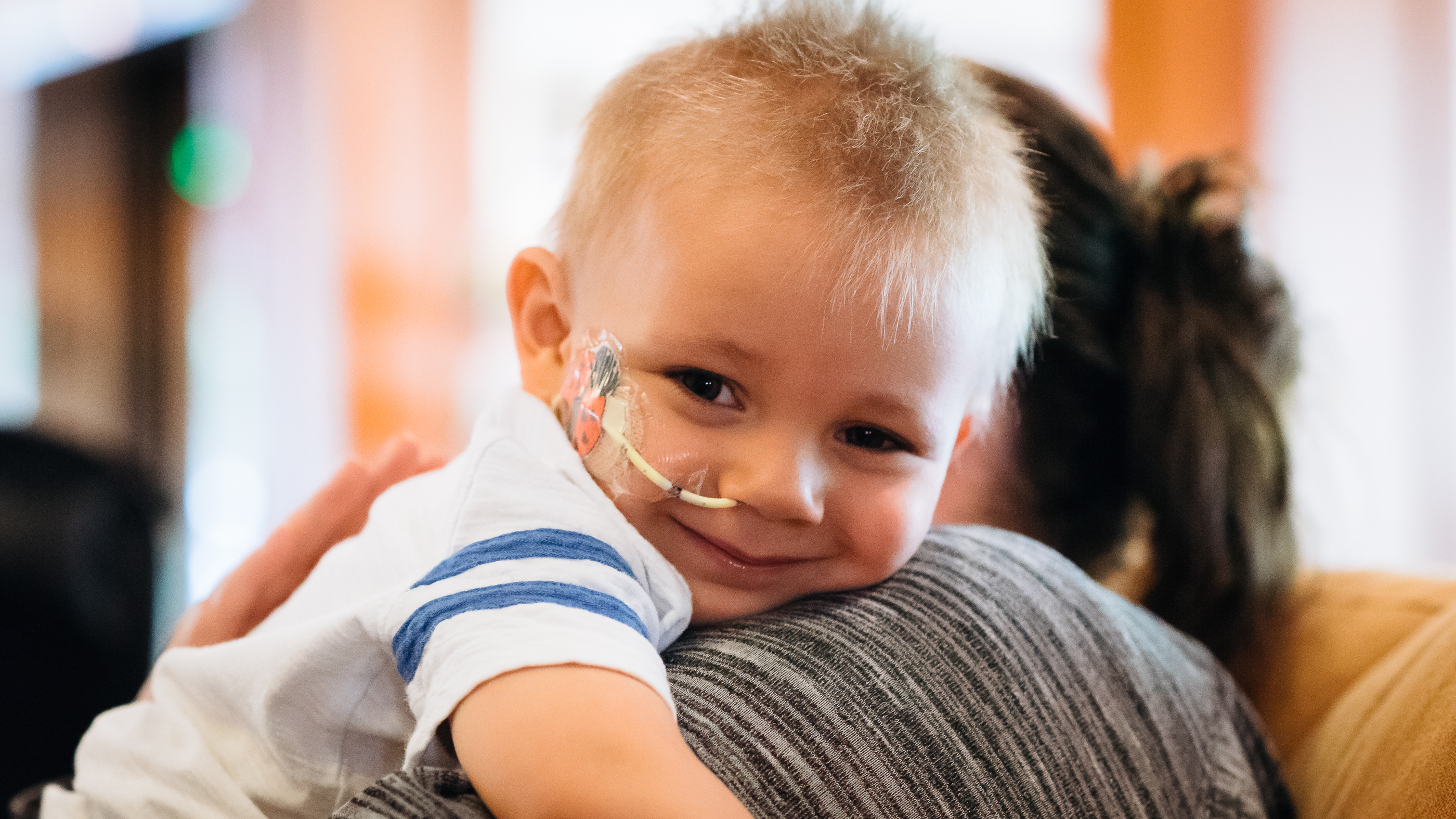 It was a Friday evening in January, the end of a long work week, and Alex’s family was sitting down to dinner at their home in Olympia. They’re a family of four: Jerry and Mary, the parents; Darnell, who’s eight years old; and Alex, a two year old.

Over the past few months, Alex had often been sick: fevers, colds, ear infections. It worried his parents, but they had recently taken him in to see their pediatrician, who had been treating the kids since Darnell was a baby. The pediatrician had taken some blood and some x-rays, and promised to be in touch. Mary was just happy to have someone she trusted looking into it.

Just as the family was sitting down to dinner, the phone rang. It was the doctor, and she had bad news: Alex’s blood work showed that his red and white blood cell counts were dangerously out of balance. She suspected that he had leukemia, and they needed to take him to Seattle Children’s Hospital right away.

“She gave us the name of the doctor we were supposed to see in Seattle,” says Mary. “And I asked her to spell it, like, five times before I got it.”

“We were in total shock,” says Jerry. “When I heard the word leukemia, it was like all the blood just rushed out of my head.”

Dinner was forgotten. The family packed a few things in a bag and got in the car. But it was a Friday evening, rush hour, and they hit traffic. So they crawled along I-5 toward Seattle, Alex and Darnell in the backseat of the car, brake lights stretching out ahead of them for miles through the darkness.

Jerry and Mary were high school sweethearts; they met when they were sixteen. They married in 2007, and both the kids grew up in Olympia.

Darnell and Alex are very different, as brothers often are. “Darnell is quiet,” says Mary. “He observes. He notices things that you think he doesn’t notice, but you have to pull it out of him. He’s very friendly, very sweet, and he’s got a kind heart, but he doesn’t talk much.”

Alex is the exact opposite: even as an infant, he was rambunctious and mischievous. “He walks up to people and he’s just like, you’re going to talk to me,” Mary laughs. “He’s very friendly and bubbly and he will get right into your personal space. And he’ll let you know if he doesn’t like something.”

“But I think that’s a good thing,” she adds after a moment, “for the fight that he has ahead of him.”

Alex was discharged from Seattle Children’s after four days, but he still needed ongoing treatment, so the family moved directly into the Ronald McDonald House in Seattle. At first, they were nervous about the transition to a communal lifestyle.

“We’re a little bit introverted as a family,” Mary explains. “We don’t have people over a lot because we’re so busy with work and the kids. So, this was a culture shock.”

In the end, though, it was the community that helped them feel comfortable at the House. “The other families help to ease you into it,” says Jerry. “That’s one of the best resources this House has: other people who are in our shoes.”

For a few weeks after they moved in, Darnell stayed in Olympia with his father during the week. But this quickly began to wear on Darnell, and he moved into the Ronald McDonald House full time at the end of January. “It was too emotionally draining for him to be home,” says Mary. “He was too worried about his brother.”

Over time, the family settled into a routine.  During the week, Jerry stays in Olympia and goes to work. Darnell goes to the Hutch School, a nonprofit that provides education to children living in Seattle temporarily due to a serious illness in the family. Mary and Alex go to his appointments at the hospital and walk through the parks around the House. When he naps during the day, she works part-time as a claims associate.

And the weekends, when Jerry comes to Seattle, are when the family tries to relax and have fun. “We sleep in and have brunch,” says Mary. “We go to the Movie Nights downstairs. Sometimes, we’ll go into town or to the zoo. But mostly it’s just lying around and relaxing.”

As the family has gotten comfortable at the House, they’ve discovered many things that make a big difference to their day-to-day lives. For one: the volunteers and facilities staff who clean the House.

“Sometimes, we’ll be in the kitchen and Alex will get sick or his tube will start leaking,” says Jerry. “We never know when we’re going to have to book it out of there, and it’s amazing to have someone just say, you know what, we got this.”

Even though all four members of the family share a room at the House, the family also appreciates the space that’s available to them here. One side effect of Alex’s treatment is insomnia, and he often wants to wander around in the early hours of the morning. At home, this wakes up Darnell, but at the House, Mary or Jerry can take him down to the play areas in the lobby or the basement.

“Honestly, Alex is more comfortable here,” says Mary. “He’s so little that this is home for him.”

Before coming to Seattle, Mary and Jerry didn’t know much about the Ronald McDonald House. But they both say that they don’t know how they would have gotten through the treatment without it. “I’m an advocate now,” says Jerry. “I really can’t speak enough good words about the House.”

“This place allowed us to be a family as much as possible,” says Mary. “We didn’t want to be here, but I don’t know what we would have done otherwise.”

Our donors and volunteers help us support families like Alex’s. To find out more about how to get involved, check out our Donate and Volunteer pages.