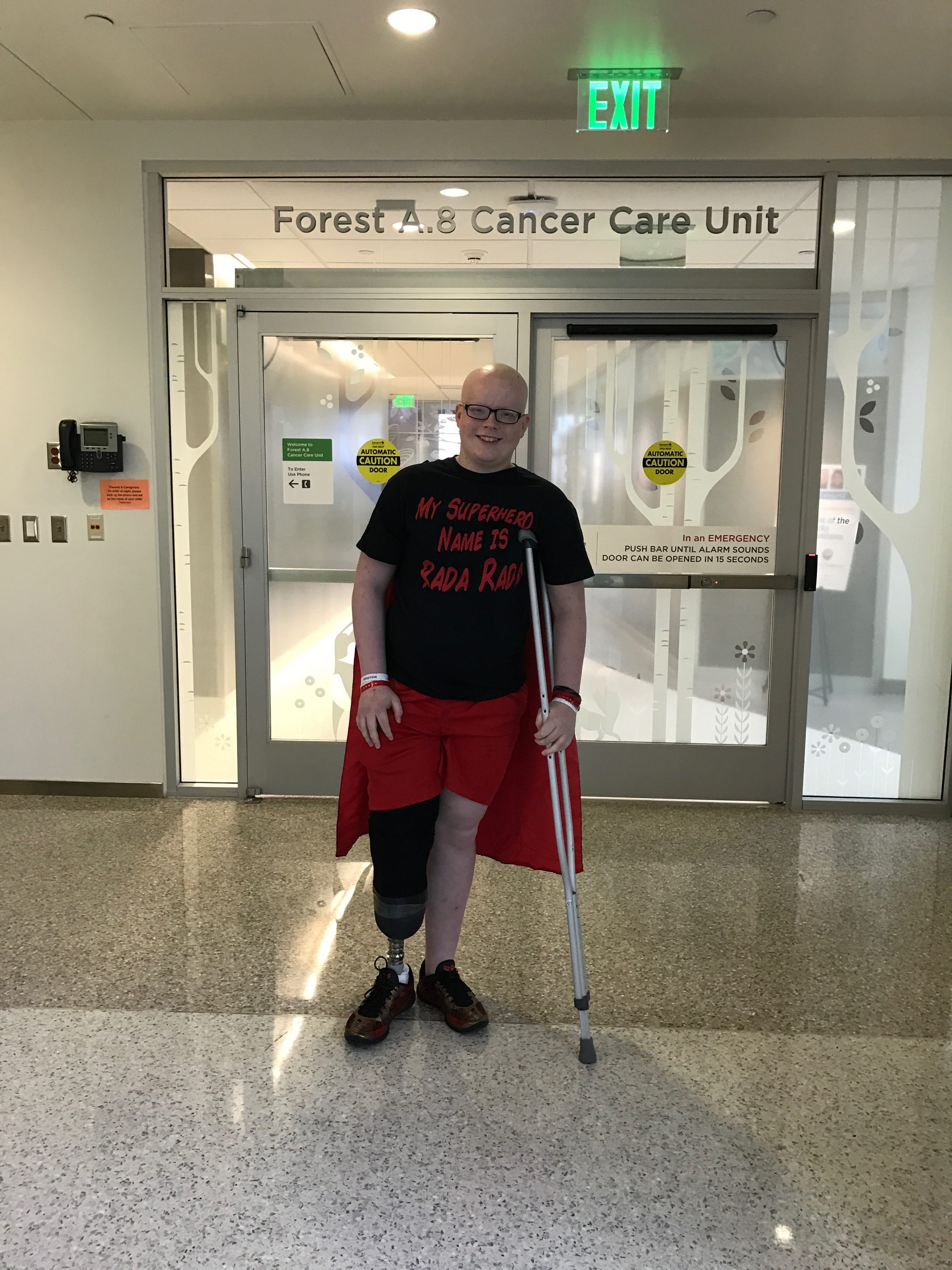 Update as of 2/27/2018: Bretton’s story has continued to inspire since we published this story in February of 2017. When Bretton skated again for the first time since his foot amputation, KOMO News was there to capture the moment. And Bretton returned as the Hockey Challenge Kid Captain in 2018, skating out onto the ice for the puck drop and competing in the All Star game at the event. Q13 interviewed Bretton about his story at the 2018 Hockey Challenge.

Bretton’s mother Kara wanted him to get involved in an activity outside of school, and they tried everything from karate to guitar lessons. Nothing seemed to capture his interest. One day, Bretton told his mom he’d like to try ice hockey – and she signed him up for a lesson at a local rink to try it out. He was an unlikely candidate for a hockey player; born prematurely, eight year old Bretton was small for his age and didn’t know the first thing about hockey.

However, ever since he put skates to ice, Bretton has had a love of hockey. “He’s met all of his close friends through hockey,” says his mom. “He stuck with it and it’s really been a perfect fit for him. It’s brought out his competitive side, so he’s right in there trying to get the puck with everyone else.” At age 16, Bretton plays hockey year-round, playing half of the year with a team in Bellingham and the other half with a team in Canada.

In 2015, Bretton broke his leg so severely that he was brought to Seattle Children’s Hospital for surgery. Doctors thought everything would heal up in just a couple of months, but he continued to have pain even after the injury had healed. They asked Bretton to come back to Seattle Children’s for a short procedure, to see if the pain could be from an infection.

“We thought it was just going to be a 30 minute outpatient thing to check on this possible infection,” says Bretton’s mom. “But they ended up doing a biopsy of what turned out to be osteosarcoma, or bone cancer. They told us that day that Bretton would have to have treatment for 10 months.” Kara and Bretton went home for 2 days to quickly pack up belongings for what would be a months-long journey.

“Within one week, our whole lives changed. Bretton had his port put in so he could get chemotherapy just a few days after the biopsy,” says Kara. “Meanwhile, I as a single mother knew I would be losing my job to be here with my son. I had no idea what we were going to do about a place to stay.” That week, a room opened up in the Ronald McDonald House – Kara and Bretton now knew that they had somewhere to call home for the next several months.

“We’ve made lifelong friends with other families we met at the House,” says Kara. “Both Bretton and I are social people and we moved here with no family or friends nearby. Amazingly, we soon met another family at the House – their son was fighting leukemia, the same age as Bretton, even from our hometown of Lynden, and the two boys had birthdays only 4 days apart.” The two were fast friends, playing video games together at the House’s teen room and eating dinner together.

During the course of treatment, Bretton’s foot was amputated to prevent the spread of his cancer. “Bretton has this incredible positive spirit,” says his mom. “He has always believed that he can beat this cancer. His attitude has made this whole journey so much easier. He’ll say ‘it’s just my foot, other people lose their lives.’”

Thanks to recent advancements in prosthetics, Bretton is doing well, learning to walk again and looking forward to being able to get back out on the ice.