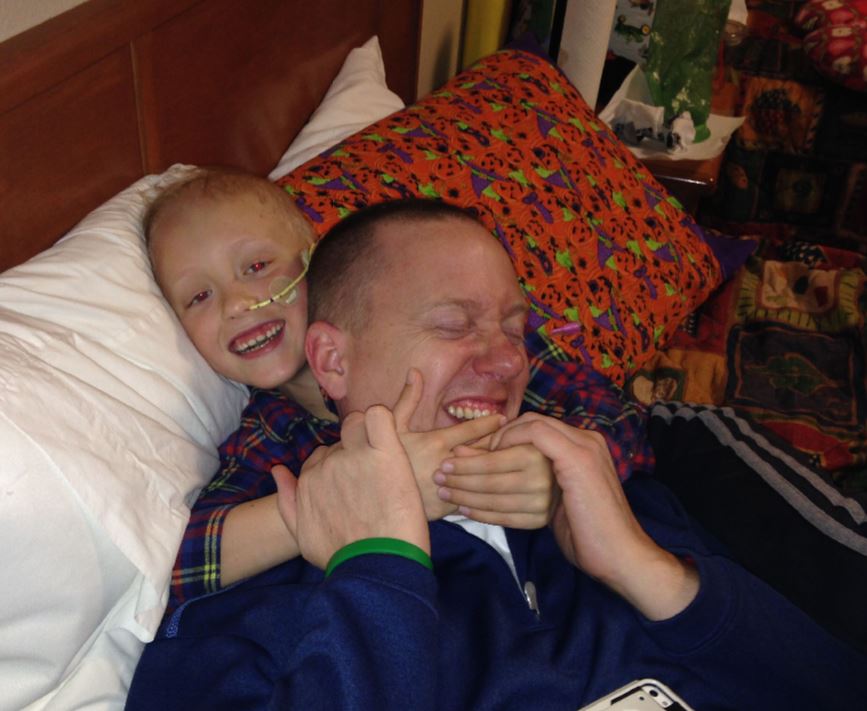 Caleb is a seven year old kid who loves Star Wars, Angry Birds, Minecraft, and funny cat videos. His life in Richland, WA was ordinary until two weeks after his parents Ben and Sarah took him to a well-child visit. That’s when their lives changed forever – they found a tumor in his nose, about the size of a marble. Caleb was immediately referred to Children’s Hospital in Seattle and he was diagnosed in just a few days with rhabdomyosacroma, a rare form of soft tissue cancer. The family has been at the Ronald McDonald House since September of 2015 while Caleb undergoes 42 weeks of chemotherapy and radiation.

Caleb and his family at the House in fall 2015

“When we first came to Seattle Children’s Hospital, we didn’t know what the diagnosis would be. We came thinking we would only be here for a week and learned that we would be staying for much longer,” says Caleb’s mother, Sarah. “In a situation like this, you can’t know what you need to bring with you. And RMHC really gets that – they had diapers for our younger daughter Abby and even dinner on the table. Just knowing that we weren’t going to have to worry about finding a place to stay really brought us a sense of peace.”

Caleb’s dad, Ben, describes RMHC as a transformative charity thanks to the full range of services it provides. “The staff here gets to know you – they ask how you’re doing and how Caleb’s treatment is going. But they also do so many little things that go unnoticed – they make sure this House is clean and safe for the sickest kids,” Ben says. “When Caleb’s hair started falling out, I asked the staff if they had a drain cover for our bathtub. They were so nice and just said, ‘We’ll put in a work order to make sure it gets cleared out.’ They know what families like ours need and take care of it.”

Caleb and his family at the Woodland Park Zoo in 2015

Caleb’s one year-old sister, Abby, has been a social butterfly at the House. Nearly everyone in the House knows her by name and she’s made many friends. Both sets of Caleb’s grandparents visit and can often be found hanging out with Abby in the House. It’s also been important for their family to have a sense of normalcy amid the chaos. “You know, my son looks normal here,” Ben says. “He’s got an NG tube [intravenous nutrition] in his nose and no hair and yet nobody looks twice at him. Even though he’s going through this intense radiation and chemotherapy, he’s made friends.”

When faced with the question of what the family would have had to do if they hadn’t been able to stay at the Ronald McDonald House, Ben’s eyes well with tears. “At first we thought, where are we going to live? Seattle is a high rent area, and we can’t afford a hotel for nearly a year. When RMHC called, it just took a huge chunk of worry of the table for us,” says Ben. “If we hadn’t had RMHC, I would have been a single father and our whole family would be split up. Really, my place is here, taking care of my son.”

The RMHC Hockey Challenge supports families just like Caleb’s. With your help, we can ensure that the more than 400 families we house a year have a home-away-from-home. “I’m so grateful to the Seattle Thunderbirds and all the teams in the Hockey Challenge that are bringing attention and raising funds for this well deserving organization that has given my family a sense of security when we’ve felt lost and out of of control,” Ben says. To donate to the RMHC Hockey Challenge or learn how to buy tickets, visit this page. Just $30 provides one night of stay for a family.