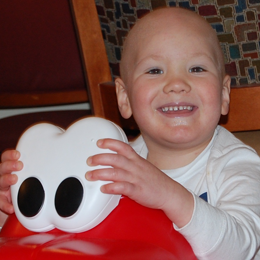 Wyatt’s mom Kirsten wasn’t preparing to run a marathon, especially one she couldn’ttrain for. She, along with husband Tom, were busy working, parenting five-year-old Moriah and two-year-old Wyatt, and enjoying weekly church activities together. In early summer of 2012, Kirsten and Tom noticed Wyatt wasn’t feeling well, and was in fact, extremely pale. “He was as pale as paper, with dark circles under his eyes,” Kirsten explains. “We thought it was a bad cold, except it lasted 4 days and we noticed the lymph nodes at the back of his neck were swollen and hard like little marbles. At the pediatricians’ office, with Wyatt clearly anemic, blood tests were ordered.

Sitting with Wyatt in the doctor’s office, Kirsten was stunned by everything that happened next. “I was told, ‘Go home, pack your bags and get back to the hospital. You and Wyatt need to be on the next flight to Seattle Children’s. We suspect Wyatt has Leukemia.’”

“I spent the next hours and days thinking ‘there has to be a mistake, this can’t possibly be happening,’ remembers Kirsten. Throughout the long emergency room wait to be admitted, an extraordinarily kind doctor spent hours answering every question Kirsten could think of. He warned Kirsten, “this is not a sprint; this is a marathon.”

It was an apt warning, as the entire next month of Wyatt’s journey presented nearly every excruciating hurdle known to exist. “Every bad side effect or set back he could go through, happened,” Kirsten painfully recalls.

The next couple months involved an exhausting juggling act of Tom trying to work, coordinate care for Moriah and suffering the additional heartbreak of being apart in the midst of a crisis. “Being away from Moriah and caring for Wyatt in Seattle made me feel like my heart was torn in half,” says Kirsten. “Helpless” Tom says.

Both parents have now had to give up their jobs, but “things got a lot better once the four of us were back together,” Kirsten says. “Without the House, we would have been homeless, hungry and penniless.”

After the first rough month, Wyatt’s condition stabilized so that he has been able to maintain a regular treatment protocol and Tom and Kirsten can often be found with others in the dining room, watching their kids play. Kirsten notes, “One thing that really surprised me when we first got to the House was the number of people in very similar situations to ours and the sense of family and community that creates. The House gives us a clean and safe place to stay that is aware of germs. The meals provided by volunteers are phenomenal – I had no idea there would be anything like that.”

The pace of the marathon has slowed but will continue for some time and the family is uprooting their lives in Montana to remain close to Seattle Children’s. Still, just being together with the finish line in sight feels like victory.