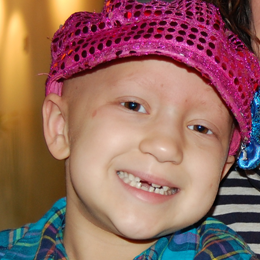 Rylie and her mom, Tracie, were accomplished at keeping things going while her dad, Kelly, was on tour in the Persian Gulf in his position of U.S. Navy Pilot. Home, school, friends, and her beloved dog Boudreaux all kept six-year-old Rylie busy.

In early April, Tracie began noticing that Rylie seemed tired much of the time, and also seemed to have a lot of bruises. “It just started to add up,” explains Tracie. “First it just seemed like a lot of bruises, and then one night in the bath, it was every protrusion on her body had a bruise. Next she was playing with the dog and I just watched as new bruises surfaced.” Tracie was a nurse eight years ago and jumped on the internet, fearing confirmation of her suspicions. Her first word search: Leukemia.

“I didn’t want to be that crazy mom who blows things out of proportion, but every single symptom listed matched what Rylie was going through,” Tracie remembers. Blood tests were ordered at the doctor’s office and two hours later mother and daughter were in an ambulance headed toward Seattle Children’s Hospital. Two days later, Rylie and Tracie were elated and relieved to see Kelly walk into the hospital room. The Red Cross had flown him to be by his daughter’s side.

Tracie knew about the Ronald McDonald House because a good friend had stayed at one three years prior while dealing with a brain tumor. “Still,” she says, “we never thought we’d be here ourselves.” A social worker at the hospital recommended they contact the Seattle Ronald McDonald House. “I didn’t know what to expect. I had imagined it as kind of an old Victorian B&B,” Tracie continues, “with maybe shared bathrooms down the hall. Instead it’s this spacious, beautiful, modern home with so many amenities.”

“All my stress and worries have been minimized here so I can concentrate on Rylie. All the smallest comforts help – the bars of soap, toilet paper. I don’t have to do a lot of grocery shopping. It’s just been an all-around blessing. I also can’t imagine having to deal with a 2 ½ hour commute – the car sickness for Rylie would be brutal. Here, we are almost right across the street from the hospital.”

At the same time Rylie was in the fight of her life, Kelly was offered, and accepted, a new post beginning in October in Washington DC. So again, while Kelly keeps his career on track, Rylie and Tracie do what they need to do until the family can be reunited. Rylie has responded so well to the treatments the family is hoping to be able to complete their move before the holidays, and in DC they will be near another hospital equipped to care for Rylie through her next phase of treatments.

As for Rylie, she’s just eager to be with both her parents and sleep in her own bed. And see lots and lots of her dog, Boudreaux.