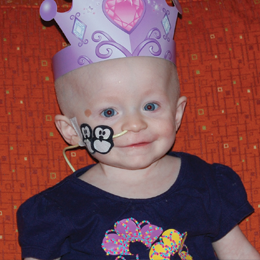 The apple of her family’s eye, 10-month-old Emily’s bright smiles were becoming few and far between in January. As her parents, Renee and Adam, grew more concerned, Emily suffered through a month of ear infections, constipation, high fevers and doctor visits. When she stopped eating altogether, they sensed something was seriously wrong and insisted on an ultrasound.

The results confirmed their fears that more than a virus was to blame for Emily’s pain and discomfort. Finding a mass on one of Emily’s tiny kidneys, the doctors immediately sent the family to a larger hospital in Anchorage, where they were met by a team of oncologists. “That was the first time we heard the word cancer,” remembers Renee. Her face clouds over as she remembers the scene. “We were told she had a Wilms’ tumor and that she’d need surgery and chemo within 18 hours. She was very sick. And I was very scared.”

Leaving Adam behind to make arrangements for their son and Emily’s big brother, nine-year-old Bailey, Renee and Emily were medevaced over 2,000 miles from home to Seattle Children’s. Emily’s treatment plan began as soon as she arrived and Renee slept at the hospital for the entire three weeks that Emily was inpatient.

A social worker at the hospital told Renee about the House, where the family could live together just blocks from the hospital throughout Emily’s treatments. “She said, ‘They sometimes have a long waiting list and I don’t know if they’ll be able to get you in,’” recalls Renee. “But the day I called, the House had a cancellation, and we’ve been living here ever since.” Now six months through what is predicted to be a nine month ordeal, Renee and Adam don’t hesitate when asked what they think of the House.

“We really appreciate the amenities for our family,” starts Adam. “It’s great being next to a park, and the activities and outings provided give us all a chance to do something that doesn’t have the word cancer in it.” Renee continues, “It is also really nice to have the support of the other families here. Many of the stories we have are very similar. There’s just support here that isn’t really anywhere else.”

Asked what she would tell another family about to embark on the same kind of journey, Renee answers, “Not to be so scared – you are not alone. There are other people going through a similar crisis.”

Emily’s cancer is now reduced to Stage 3, and the family is hopeful she will continue responding to the treatments. Bailey is looking forward to going home to play with his two dogs and see all his classmates, and also play with his new birthday toys that are at home waiting for him. Emily is mastering the art of walking in between chemo appointments. Renee says,“Emily’s daddy will have plenty of work ahead of him toddler proofing the house, because this little girl is on the move.”