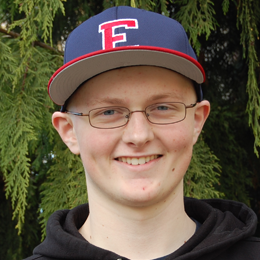 Parents of high school athletes learn to live with the bumps and bruises their children tend to collect over time. Alex’s parents, Christina and Kelly, were no different, and at first thought nothing of the small, hard bump that appeared one day on Alex’s wrist. An avid baseball player and motorcycle rider, Alex was also the picture of health.

When the bump didn’t seem to resolve in a timely manner, they had the family doctor take a look. Finding the small growth just abnormal enough, Alex’s doctor sent him to see an orthopedic surgeon, who would decide to either remove it, or take a biopsy.When the call came to cancel their follow up appointment the next day and come to the office immediately, they knew something was wrong. “Our doctor was concerned about Alex and wanted to deliver the news personally, so he could tell him what to expect and to let him know he’d make it through this,” remembers Christina. The diagnosis was Ewing’s Sarcoma, a bone and soft tissue cancer.

Alex and his family soon learned his treatments would require staying in Seattle for over six months, and he and his mom were grateful to learn about the Ronald McDonald House right away. “Alex had been in-patient and I stayed with him in the hospital. We were on the waiting list for the House and a room opened up the day Alex was released for the first time,” Christina says. Kelly and Alex’s older siblings, Amber and Austin, have maintained their schedules in the family’s hometown of Ellensburg, with Kelly often traveling to Alaska for work. Staying with Alex in Seattle, Christina is amazed by the presence and contributions of volunteers and the overall efficiency of the House. “I had a vision of what it would be like at the House but couldn’t have understood how special it is. I am so thoroughly impressed with how comfortably it’s set up for the needs of people here. It has also been wonderful to connect with the other parents.”

Alex steadily demonstrates a resigned yet determined attitude toward the cancer, his treatment and the fact that he is missing out on two of his favorite things: baseball season and his first chance to ride the entire 100 miles of the Odessa Desert 100, an annual off-road motorcycle race in Odessa, Wa. His treatments require a lot of inpatient time at the hospital but when he’s back at the House he likes the dinners prepared by volunteers and the fact he can go to the kitchen any time he wants. “This place is nice. It makes everything easier,” says Alex, with seven more months to go.