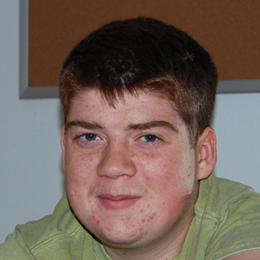 An honor student in school, Adam’s teenage years were kicking into full gear with a truck of his own and his first job. He had just started the job, in the same grocery store in town where his mom, Kate, worked. Noting Adam was dragging around acting like he wasn’t feeling well, Kate said, “Adam! You can’t call in sick – you just started!” But there was no denying, Adam just wasn’t feeling well.

It was June, and at the walk-in clinic where they checked in to see what might be ailing him, Kate dutifully told the doctor about Adam’s diagnosis at the age of five with a muscular disease called myotubular myothopy. The only thing this disease ever kept Adam from doing was athletics and he had always been an otherwise healthy boy. Adam was tested for asthma but when that test came back negative, and aware of his history, the clinic sent him to a cardiologist who ran an echocardiogram. Immediately upon reviewing the pictures, the doctor pulled Kate aside and said she and her son would be headed to Seattle Children’s within hours. Suddenly Adam wasn’t just a tired teenager; he was someone who needed a heart transplant.

With nothing but the clothes on their backs, mother and son were on a Life Flight to Seattle. Once at the hospital, Adam underwent procedures which would keep him and his organs functioning until a heart became available to transplant. Staying by her son’s side in the intensive care unit, Kate didn’t even try to check in to the Seattle Ronald McDonald House. Once he was out of the ICU, however, she realized that she needed to sleep and asked if a room was available. Two days later, Kate checked into the room she and Adam would call home the next few months.

Happily, Adam received his transplant in mid-August and all appears to be going well, though the fragility of his immune system during recovery has meant he and his mom are very familiar with the four walls of their room at the House. That doesn’t seem to matter to either one of them. Living at the House has been “absolutely fantastic,” says Kate. “It’s within walking distance of the hospital and stores. It’s a place to live! I’d be sleeping in my car otherwise, or paying for a hotel which would have sucked up all the money that’s been donated to cover the gaps in insurance.” Kate credits the kindness of her fellow employees and members of their church for raising close to $25,000, which they’ve put toward medical expenses.

“If I learned someone I knew had to go through what we have, I’d tell them yes, the House is the best thing going.” She fights back tears, saying “the staff here is so kind. They always want to know how your kid is doing.”